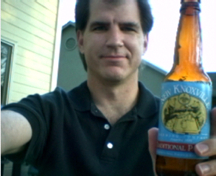 I am sitting on the back enjoying the free beer that Brian from the New Knoxville Brewing Company gave Karen and I while in Chattanooga, TN for the Southern Brewers Festival. (Sorry about quality of the web-cam picture)

The New Knoxville Brewing Company has been reborn many times from what the guys working the taps told us. Originally, the brewer was founded in 1886. According the company, beer is brewed in small 25 barrel batches using brick-clad brew kettles and open-top fermentation, which is uncommon in United States.

I have the Traditional Pale Ale and the India Pale Ale. The beers are very true to their styles. I would have to say that I enjoyed to taste of both, but the clarity was so so.

If you are looking for some free music, I would suggest that you hop on over to iTunes and this sample of free music from Scandinavia

The free songs are sponsered by Volvo.